What to Expect from Microsoft's Windows 11 Event

By Samuel Adams
In: Windows 11

Windows 11 is one of the worst-kept secrets in tech, with plenty of screenshots and even a full built of the OS leaked online well before the event on June 24. Leaks aside, Windows 11 is poised to be the largest update to the world's most popular operating system since the debut of Windows 10 back in 2015. While there is still plenty of speculation around the specifics, here's what you can expect to see from Microsoft when they take to the virtual stage to unveil Windows 11 on June 24.

While Windows 10 is already sleek, Windows 11 is making some major quality of life improvements in the design department. Microsoft is finally ditching the legacy floppy disk icons and other aging menus buried in the control panel, replacing them with modern designs that help Microsoft better compete with Apple when it comes to the user interface. Leaked screenshots show that the taskbar and windows are now rounded, bringing Windows 11 in line with what MacOS users have come to expect. Microsoft is also updating icon designs, creating a much more cohesive brand across the entire Microsoft Office 365 productivity suite.

Deeper Integrations with Teams and OneDrive

After staggering growth during the COVID-19 pandemic, Office 365 is more important than ever to businesses and workers around the world. While nothing has been directly confirmed, it's safe to assume that more integrations with the Office 365 family of software is certainly on the way. In the same way that OneDrive and SharePoint are directly integrated into the File Explorer today, it wouldn't be a far-fetched idea to think that Microsoft is going to take their integrations even further with the next iteration of Windows. 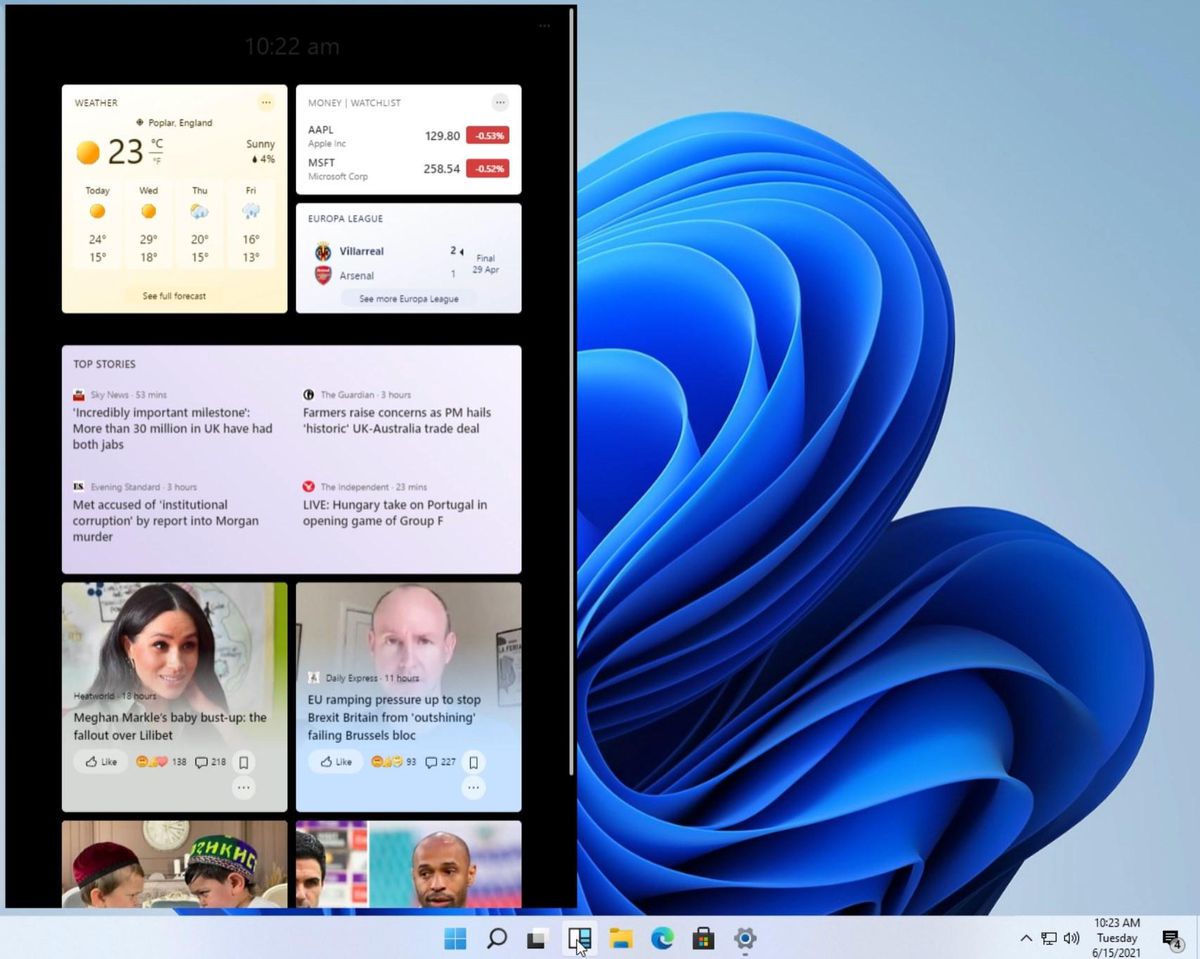 As shown in the leaked screenshots, Gadgets are making a return. While it's highly unlikely they'll stick with the legacy name, Gadgets are useful snippets of information that are designed to function similarly to Widgets on Android or iOS devices. Clocks, calendars, news updates, and more will be accessible from the sidebar within Windows 11. For the busy-body multitasking crowd out there, the next iteration of Microsoft's OS introduces a way you can squeeze even more into 30 seconds on your PC.

Microsoft's goal with any new operating system is to migrate as many users over as possible, as soon as possible. With Windows 10 updates scheduled to end in 2025, it's important for users to onboard with Windows 11 and get comfortable with the UI early on to minimize security risks and keep users protected. When Windows 10 replaced the ill-fated Windows 8.1, Microsoft encouraged users to upgrade for free within a specific upgrade period. It's likely that Microsoft recycles their strategy once again in an effort to boost adoption rates and keep the bulk of their user base on the newest OS... even though there are still people out there risking it all and using Windows XP.

Microsoft is a company that keeps their focus on one goal: creating an ecosystem that empowers each user to more easily accomplish their goals. Windows 10 marked a major leap forward in the PC space, creating a versatile platform that empowered people to create, explore, and achieve more. From industry insiders, Windows 11 has been described as the first step toward the future of Windows. In screenshots and videos shared by The Verge's Tom Warren, it's clear that Windows 10 is still at the heart of Windows 11 - and for good reason; it's a great OS.

For businesses, Microsoft provides the ultimate platform for communicating, collaborating, and sharing with your team. SeedSpark is more than a managed IT team. We provide scalable solutions that help solve today's troubles while preparing your business for tomorrow. If you're interested in finding out if the Microsoft ecosystem could be the right toolkit for your organization, we'd love to explore together. Contact our team today to learn more.

PREVIOUS POST
How Does a Ransomware Attack Work?
Next Post
Why You Need a Backup and Disaster Recovery Plan

How to Remove Chat from Windows 11 Taskbar

Windows 11 is officially here, available as a free upgrade for all Windows 10 users. While many organizations are rolling out the new OS in the months ahead, one of the first things that users will notice is the Chat icon in the taskbar. Microsoft is making Teams a fundamental part of the experience in Windows 11 - so much so that they've baked it directly into the Taskbar.

By Samuel Adams
In: Windows 11
END_OF_DOCUMENT_TOKEN_TO_BE_REPLACED

What is Windows 11 S Mode and Should You Use It?

By Samuel Adams
In: Windows 11
END_OF_DOCUMENT_TOKEN_TO_BE_REPLACED

What New Features Are Coming to Windows 11?

Windows 11 is launching on October 5, introducing the world to the newest operating system set to power millions of devices around the world over the next decade. With plenty of public previews in the wild, Windows Insiders have had plenty of time to learn what's new with Microsoft's latest OS. Here are some of the biggest new features coming to Windows 11 when it launches this fall.

By Samuel Adams
In: Windows 11
END_OF_DOCUMENT_TOKEN_TO_BE_REPLACED